Hang Tuah was a warrior hero who lived in Malacca during the reign of Sultan Mansur Shah in the 15th century. Legend of Hang Tuah was very popular both in Malaysia and Indonesia.

This writing won't discuss details of the warrior's history, but we will show you how this man was highly respected both in Malaysia and Indonesia.

We can't show all of Hang Tuah related buildings or roads. According to Ministry of education's database (January 2021) , there are 147 (one hundred and forty seven) educational institutions named "Hang Tuah" in numerous cities of Indonesia, ranging from kindergartens to universities.

Hang Tuah lived in The Malacca Sultanate (Kesultanan Melayu Melaka). It was a Malay sultanate centred in the modern-day state of Malacca, Malaysia. At the height of the sultanate's power in the 15th century, its capital grew into one of the most important entrepôts of its time, with a territory covering much of the Malay Peninsula, the Riau Islands and a significant portion of the northern coast of Sumatra in present-day Indonesia.

KD Hang Tuah is a frigate operated by the Royal Malaysian Navy since 1977. She was built in the United Kingdom, originally for the Ghana Navy, but was launched and completed as a private venture, before being purchased by the Royal Navy in 1972. She served for five years as HMS Mermaid (F76) before being purchased by Malaysia, where she replaced another ex-British frigate also called Hang Tuah.

KD Hang Tuah became a training ship in 1992, retired and turned into a museum ship in 2018.

In 1949 HMAS Ipswich was transferred by the Royal Netherlands Navy to the Indonesian Navy and renamed Hang Tuah. In April 1958 she was bombed and sunk by an aircraft operated by forces in rebellion against the Indonesian Government.

Jalan Hang Tuah Raya in South Jakarta is a one-way street filled with small offices and hidden gems, such as a world class beauty center and a cute coffee shop.

The Hang Tuah Centre is a lavish museum and tourism complex located at Kampung Duyong, Melaka that is dedicated to the famous Malay hero Hang Tuah.

The Centre explains at some length the history, legend and myths surrounding Hang Tuah by using a range of modern museum techniques like videos, models and interactive displays to keep you entertained.

Stadium Hang Tuah or Stadium Kubu (English: Hang Tuah Stadium or Kubu Stadium) is a multi-use stadium in Malacca City, Malacca, Malaysia. The stadium has a capacity of 15,000 with 1,000 seating capacity at a particular time. It is mostly used for football matches and currently the home stadium for SAMB. It also serves as the second home stadium and training ground for Malacca United.

Hang Tuah Stadium in Pekanbaru was normally used for football matches and as the home venue for PSPS Pekanbaru of the Liga Indonesia. The stadium had a capacity of 5,000 spectators. In 2000, the stadium was demolished due to the expansion of Mosque An-nur as well as the development a public park surrounding the mosque. 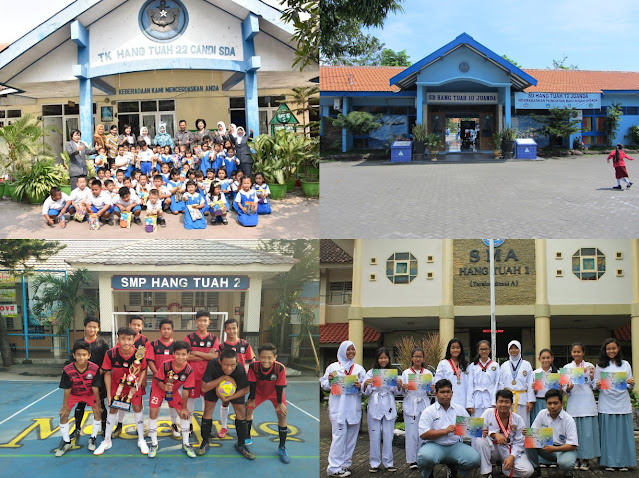 According to Ministry of education's database, there are 147 (one hundred and forty seven) educational institutions named "Hang Tuah" in numerous cities of Indonesia, ranging from kindergartens to universities.

The Taming Sari Tower (Menara Taming Sari) is a revolving gyro tower in Malacca City, Malacca, Malaysia. "Taming Sari" is named after the famous keris (traditional weapon) in Malay folklore. It is believed to have been wielded by Hang Tuah, and is fabled to grant physical invulnerability to its wielder.