The Mekong River begins in the middle of China, carving its way south from the vast Tibetan Plateau, eventually forming the border between Myanmar and Laos, then between Laos and Thailand. The waterway winds through Laos, Cambodia and Vietnam, finally draining into the South China Sea.

Roughly meaning "Mother of Rivers" in Thai and Lao languages, the Mekong River is a sacred lifeline in Southeast Asia.

Mekong river has a long history, where populations have depended on it for thousands of years to survive. The first civilization recorded in 2100 BC, i.e. the Indianised Khmer culture of Funan. It was proven with the coins discovery as old as the Roman Empire. 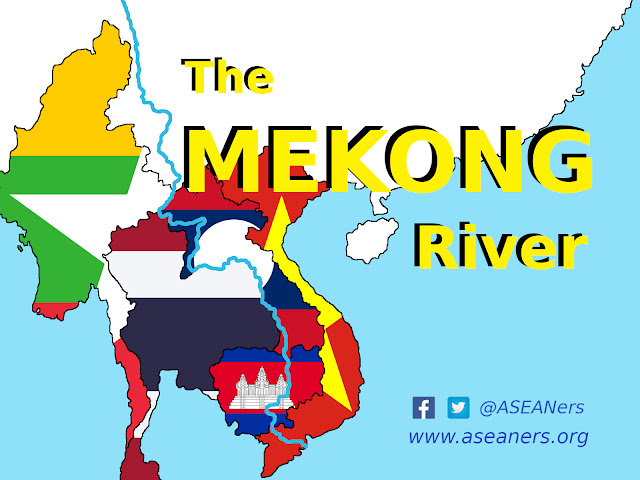 The first European to encounter the Mekong was the Portuguese Antonio de Faria in 1540. European interest was sporadic: the Spanish and Portuguese mounted some missionary and trade expeditions, while the Dutch Gerrit van Wuysthoff led an expedition up the river as far as Vientiane in 1641–42.

In 1995, Mekong River Commission (MRC) was formed and declared the Agreement on the Cooperation for the Sustainable Development of the Mekong River Basin. This declaration was signed by the governments which form the commission ( Cambodia, Laos, Thailand and Vietnam). China and Myanmar became "dialogue partners" of the MRC in 1996. The Mekong river itself has become an important part in economic growth and prosperity in Southeast Asia.

As compared to other countries which Mekong River flows through, in Myanmar, this river puts less profound influence on the life and the culture. As the length of the Mekong River in Myanmar only takes up  about 120 miles, mostly along the border it shares with Laos.

The Mekong River is the world’s most productive inland fishery. Cambodians and Laotians catch more freshwater fish per capita than anyone else on the planet.

Laos actually has the greatest share of the Mekong River. It's vitally important to the country; even the broad blue stripe in their National Flag represents the Mekong. In the past - with few good roads and mountainous terrain - these waters are Laos' principal transportation and communication artery. Sometimes,  the Mekong river is called the "Sea of Laos."

As the Mekong enters Laos, the first city it encounters is Luang Prabang. The ancient capital of Luang Prabang Province in northern Laos, lies in a valley at the confluence of the Mekong and Nam Khan rivers. Inhabited for thousands of years, it was the royal capital of the country until 1975.

The First Thai–Lao Friendship Bridge is a bridge over the Mekong, connecting Nong Khai Province and the city of Nong Khai in Thailand with Vientiane Prefecture in Laos; the city of Vientiane is approximately 20 km (12 mi) from the bridge.

In Cambodia, the Mekong enters the country in the northeast, at the border with Laos, in the province of Steung Treng. From there it flows southwest through the provinces of Kratie, Kompong Cham, and Kandal, before meeting up with the Tonle Sap river in Phnom Penh. From here, the Mekong separates itself again and flows south to Vietnam – slightly to the east of the Tonle Bassac river – a distributory river of the merging of the Mekong and the Tonle Sap.

The Mekong contributes to Cambodia’s unique river system. In the dry season, the Tonle Sap flows into the Mekong where the two rivers meet in Phnom Penh. In rainy season, when the Mekong’s waters are high, the volume of water pushes the flow from the Tonle Sap back up north, reversing the seasonal flow of the river and flooding the Tonle Sap lake and the surrounding plains.

The wonder of Golden Triangle is the visit to 3 countries; Thailand, Myanmar, and Laos, in one place. It is 9 kilometers north of Chiang Saen along the Mekong riverside road. Sop Ruak is the place where Mekong River, the border between Thailand and Laos, meets the Ruak River, the border between Thailand and Myanmar. In the past, Golden Triangle was the world’s large source of drug trafficking owing to its privileged location attached to many countries. However, it is currently taken good care of and becomes a popular tourist attraction.

Ban Sop Ruak is a village in Wiang subdistrict (tambon) of Chiang Saen District (amphoe) in Chiang Rai Province, northern Thailand. The village is situated at the confluence of the Ruak River and the Mekong River which forms the tripoint border of Thailand, Myanmar and Laos. This location has enabled it to be marketed to tourists as the "heart" of the Golden Triangle (Southeast Asia), as the area is popularly known as.

The Mekong flows beside the northern Thai city of Nong Khai, providing the border between Thailand and Laos on the other side of the river. There is a promenade that runs along several hundred meters of the river, providing a very pleasant early morning walk, or evening stroll.

The Mekong Delta is the region in southwestern Vietnam where the Mekong River approaches and empties into the sea through a network of distributaries. One of the most interesting sights in the Delta are the floating markets and associated river life. Cai Rang Floating Market opens all day but it is busiest from sunrise to about 9am. The main items sold there are farm products and specialties of Cai Rang Town, Chau Thanh District and neighboring areas. Every boat has a long upright pole at its bow on which samples of the goods for sale are hung.

During the early morning market hours, larger sized boats anchor and create lanes that smaller boats weave in and out of. The waterway becomes a maze of hundreds of boats packed with mango, bananas, papaya, pineapple, and even smuggled goods like cigarettes. Sellers do not have to cry out about their goods because their goods can be seen in a distance and their cries would not be heard in the vastness of the river and the noise of boat engines. Small boats that sell beer, wine and soft drinks go among the other boats to serve market-goers and visitors. Sellers tie their goods to a small boat tall pole so that buyers can see from a distance what they are selling.

Sóc Trăng is home to the largest population of Khmer people outside of Cambodia, which is why this city has an interesting cultural feel to it that’s different from the Vietnamese cities in the area. The best examples of Khmer culture are the Clay and Bat pagodas, both famous for their intricate designs. This city may not have many flashy things to do, but those who prefer a relaxed experience will enjoy the calm vibes here, especially in the rice paddies that surround the city. If you’re in the area around November or December, be sure to check out the Oc Om Boc festival.

A wonderful way to get to know the Mekong and understand why it is so important is to take a trip from Ho Chi Minh City and explore the river via speedboat.