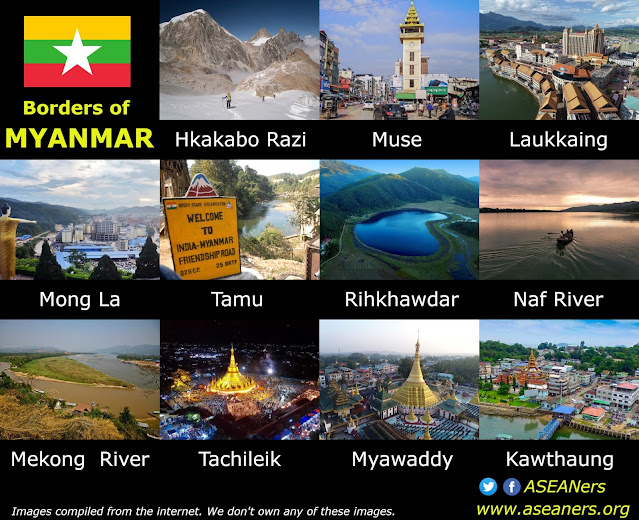 Myanmar has the highest number of bordering countries in Southeast Asia, with 5 countries sharing its  land boundary. The western side of the country is bordered by Bangladesh and India, while Laos and Thailand border the eastern side. China forms the border to the north and the northeast of Myanmar. The south is not bordered by a country but by two water bodies, namely the Andaman Sea and the Bay of Bengal. This post only covers some of its border areas.

Hkakabo Razi is located in the northern Myanmar state of Kachin in an outlying subrange of the Greater Himalayan mountain system near the border tripoint with India and China.

Hkakabo Razi is the highest mountain not only in Myanmar but also in Southeast Asia. It is covered with snow all year round.

Muse , pronounce as Mu Zay , is a town situated on the bank of Shwe Li River (Nam Mao in Shan) bordering with China, Yunnan Province. The meaning of the town is said to be Mu (community) Zay (province) = Community Province.

Laukkaing (also known as Laukkai or Laogai or Laokai) is the capital of Kokang (also known as Special Region 1) in the northern part of Shan State, Burma. It is situated on the Salween River, which forms Myanmar's border with the People's Republic of China. It is about 10 miles away from Nansan , China.

Laukkaing is situated in Kokang region. Kokang had been historically part of China for several centuries. In Laukkaing, the south-western dialect of Mandarin and Chinese characters are widely used.

Mong La is situated in Shan state and shares its border with Daluo, a Chinese town in Yunnan Province.

Mong La emerged from a small remote village in the 1990s to become a local version of Las Vegas.

The Myanmar-India border is 1,468 km (912 miles) in length and runs from the tripoint with China in the north to the tripoint with Bangladesh in the south. The border separates the Kachin State, Sagaing Region and Chin State of Myanmar from the Indian states of Mizoram, Manipur, Nagaland and Arunachal Pradesh. In addition to the long land border, Myanmar and India also share a maritime border along India's Andaman Islands.

Two of the international entry-exits check points which is Tamu - Moreh and the other one is Rihkhawdar – Zowkhawtar are open to normal visitors with valid passports and visa. Moreover ,  people living in border areas are allowed to travel within 16 km of the border without special permit.

Tamu, Myanmar-India border
Tamu or Tat,  Mu is a town in Sagaing Region in north-west Myanmar near the border with the eastern Indian state of Manipur. The Indo-Myanmar Friendship Bridge connects Tamu to Moreh in Manipur, India.

Gate no. 2 in Tamu, is for pedestrians shopping at Namphalong market. Namphalong – a few steps distance from Moreh (India) –  is separated only by barbed wire fencing and is a market place sponsored by Myanmar government to cater to the needs of Indian buyers. Namphalong market has offered its shoppers a wide range of goods, ranging from stylish clothing wear to shoes and bags, household crockery to electronic gadgets, sweets to soaps, all at reasonable prices.

Rikhawdar, is a border town in Falam District, Chin State, Myanmar. It lies next to Zokhawthar village of the Champhai district of Mizoram, India.

Rih Dil / Rih Lake is a natural lake located in northwestern Chin State in Myanmar. It lies at about 3 kilometers from Zokhawthar (India). It has a heart-shaped outline.

The Mizo people are an ethnic group indigenous to Mizoram (India) and its surrounding areas, which includes parts of Myanmar and Bangladesh. Rih Dil is a heart-shaped lake (word Dil means Heart) deeply rooted in Mizo history, culture, and folklores.

According to the Mizo customs, newlywed couples visit the lake to seek blessing and pray for a long marriage. Mizo ancestral tribes also consider the Rih Dil Lake as the gateway to Pialral, or “beyond the world.” It is believed that all souls destined to Pialral must pass through the lake.

Rih Lake has so much cultural and historical importance for Mizo people of Mizoram (India). Sometimes, this lake is mistakenly known as "The largest lake in Mizoram", but it's actually situated in  Chin State, Myanmar.

Myanmar-Bangladesh border stretches 270 kilometres (170 miles), from the tripoint with India in the north, to the Bay of Bengal in the south.

Situated on the banks of the Kaladan River in Chin State, Paletwa is one of the westernmost towns of Myanmar. The countryside surrounding Paletwa is home to traditional Chin villages. Although it's only 18 kilometers from the border, there's still no direct access from Bangladesh yet.

The Naf River is an international river marking the border of southeastern Bangladesh and western Myanmar. It is the only river that is shared between Myanmar and Bangladesh. The eastern coast of the river is Arakan, state of Myanmar, and the western coast is Teknaf of Bangladesh.

Naf River is originated from the Arakan Hills of Myanmar and after flowing as a trans-boundary river, it finally falls into the Bay of Bengal.

The Myanmar-Laos Friendship Bridge links Kyainglap (Kenglap) in Tachileik district and Xieng Kok in Luang Namtha, Laos. The border agreement will allow citizens of the two countries and third country national travelers to cross the border between Myanmar and Laos through Wan Pong with the necessary visas or passports.

The border is 2,416 km (1,501 miles) in length and runs from the tripoint with Laos in the north to Andaman Sea coast in the south.

Tachileik/Tachilek is a border town in the Shan State of eastern Myanmar. It is the administrative seat of Tachileik Township and Tachileik District. It is also the most populated city in the eastern Shan State.

Myawaddy is a town in southeastern Myanmar, in Kayin State, close to the border with Thailand. Separated from the Thai border town of Mae Sot by the Moei River (Thaung Yinn River), the town is the most important trading point between Myanmar and Thailand.

Kawthaung is a town located in the southernmost part of Myanmar, in the Tanintharyi Region. During British rule in Burma between 1824 and 1948, it was known as Victoria Point.

Kawthaung is an  important trading point, many people make the 20-minute trip across the water from the Thai border town of Ranong for a visa run or a bit of sightseeing and shopping

It is a main gateway for tours to spectacular 800 islands of Mergui Archipelago and travel northbound to Myeik and Dawei which also have some amazing beaches.

Kawthaung offers options for further travel in Myanmar, such as this beautiful Cockburn Island.