Perhaps, many of us have memorized all of the ASEAN member countries' names. But do we know how  ASEAN country codes created? Why all of  the country codes in ASEAN start with 6, 8 or 9? Why some countries have 2 digit phone codes, but the others have 3 digits? 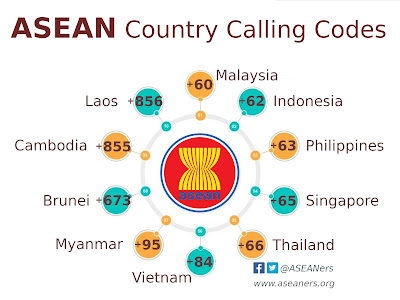 Telephone devices were invented in the 1870s, but the concept of country codes was not introduced until the 1960s. In 1960, the ITU (International Telecommunication Union) organization published guidelines for standardizing country codes, which were contained in a report known as the Red Book. At that time, Red Book mostly only included European countries and were no more than two digits long.

In 1964, these rules were enhanced through a new guidebook, the Blue Book. This guide divides the world into 9 major zones, and country codes follow the zone numbers. Zone 1, 2 and so on until zone 9. Most ASEAN countries are in zone 6 (dialing code starting with 6). But there are also ASEAN countries in zones 8 and 9.

Why ASEAN country calling codes started with 6,8 or 9?
See the following picture. It can be seen here that ASEAN member countries are not grouped in the same area. It should be noted that ASEAN was founded in 1967, while the grouping of country codes was carried out in 1964 (before ASEAN was founded). Because of that,  it is understandable that countries in ASEAN do not have the same country calling codes' prefix. 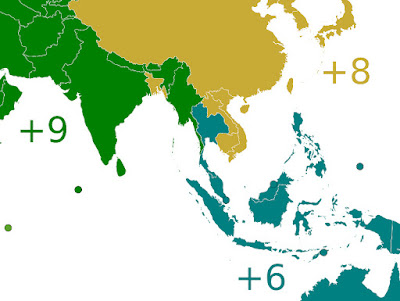 It can be seen here that Malaysia, Indonesia, the Philippines, Singapore, Thailand and Brunei are grouped in areas with the prefix 6. Namely Southeast Asia and Oceania.
In 1964, it seemed that the concept of Southeast Asia was different from today. Vietnam, Cambodia and Laos are considered part of the East Asian countries. Therefore it is given a code beginning with 8, along with China, Korea and Japan.
Myanmar is the only country in ASEAN with country codes starting with 9. Myanmar was previously part of British India. Therefore the country code for Myanmar begins with 9, along with countries such as India and Pakistan. (Myanmar +95, India +91, Pakistan +92). The +9 code is allocated for Middle East and South Asian countries.
Why Brunei, Cambodia and Laos have 3 digit country codes, while other ASEAN countries have 2 digits?
When country code was being organized, the telephone devices were not what they are now (which are very easy to use). The telephone commonly used at that time was rotary phone. The older generation may have been familiar with this type of device.

By using an old telephone device, of course it would be very troublesome if the phone number was very long. At the time, policymakers hoped that phone numbers would not be longer than 11 digits. Thus, countries with a small population will receive a 3 digit country code. Others will get 2 digits. Of course, it was a consideration in the past, it has not been imagined that one person can use several telephone numbers.

Just additional information. Few countries have single-digit codes. Code +1 is jointly owned by the United States and Canada. The code +7 is jointly owned by Russia and Kazakhstan. Previously this code +7 was owned by the Soviet Union. With the dissolution of the USSR, the fractional states used their respective codes. Only Russia and Kazakhstan use the code +7.