Get to Know Angkor Wat

Angkor Wat is a temple complex in the province of Siem Reap, Cambodia. "Angkor" means "City or Capital", while "Wat" means "Temple". It's the largest religious monument in the world by land area  (162.6 hectares).

King Suryavarman II reigned from 1113 to 1150 and was the first Khmer King to be depicted in art. A bas relief in the southern gallery of Angkor Wat shows him sitting on a throne carved in the shape of Naga snakes.

Angkor Wat was never lost nor forgotten by the Khmers. However, what made this building famous in the western world was a French explorer Henri Mouhot. He is not the first to discover Angkor Wat. In fact, he was not even the first westerner to visit Angkor Wat, but through his writing this temple became more famous. Henri Mouhot wrote that the site was "grander than anything left to us by Greece or Rome".

On December 14, 1992, UNESCO listed Angkor Wat as a World Heritage Site. Angkor Wat’s World Heritage status is of great importance to Cambodia because protecting and preserving the temple requires a lot of funding. The World Heritage listing is an opportunity that allows Cambodia to seek international financial support to help with maintenance and conservation. 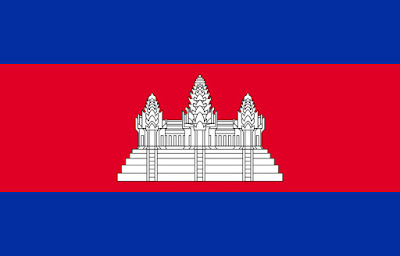 Since around 1850, the Cambodian flag has featured a depiction of Angkor Wat in the center. The current flag, with a blue border and red central was adopted following Cambodia's independence in 1948.

The Cambodian flag is the only country's national flag that has an image of a temple.